The da Vinci System has brought minimally invasive surgery to more than 3 million patients worldwide. da Vinci technology – changing the experience of surgery for people around the world. 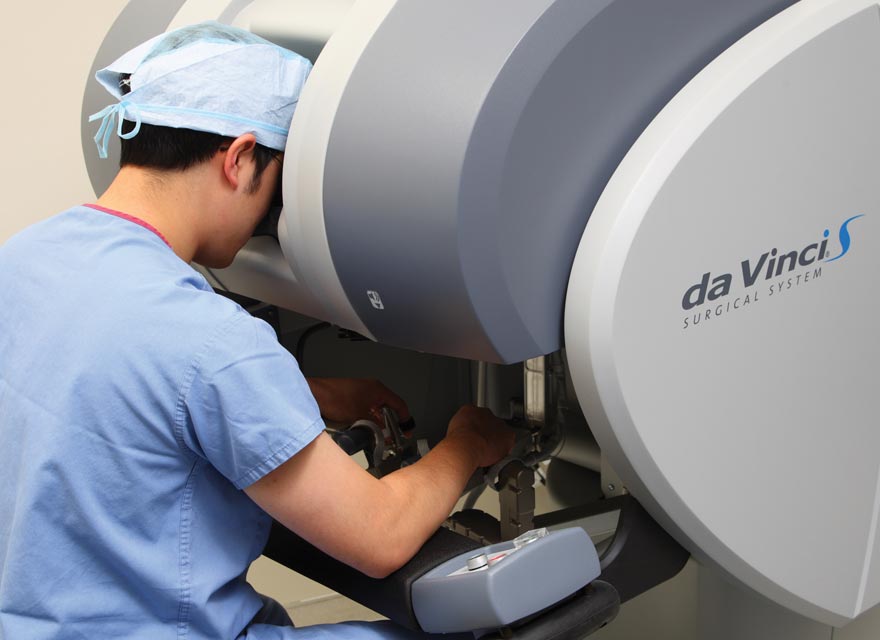 About The da Vinci® Surgical System

With the da Vinci Surgical System, surgeons operate through just a few small incisions. The da Vinci System features a magnified 3D high-definition vision system and tiny wristed instruments that bend and rotate far greater than the human hand. As a result, da Vinci enables your surgeon to operate with enhanced vision, precision and control.

With its 3-D view, the da Vinci Surgical System aids the surgeon in more easily identifying vital anatomy such as the delicate nerves surrounding the prostate. The EndoWrist Instruments provide the surgeon with dexterity not available using conventional laparoscopic instruments to perform a delicate and precise surgical dissection and reconstruction of the bladder and urethra.

The da Vinci Surgical System enhances the advantages of laparoscopic surgery, which are:

The da Vinci Surgical System will enable a minimally invasive alternative to open surgery! The da Vinci System is the only operative robotic system cleared for Radical Prostatectomy procedure.

The American Cancer Society estimates there are 180,000-2000,000 newly diagnosed cases of prostate cancer annually. Prostate cancer is the second leading cause of cancer death in men in the United States with approximately 40,000 men dying of it each year. Prostate removal is the most common procedure performed on men with prostate cancer and is typically performed through large, open surgical incisions, which often result in lengthy and uncomfortable patient recovery. There is a significant risk of impotence and incontinence with prostatectomies.

Other urologic robotic surgeries performed by the da Vinci Surgical System are:

“Robotic surgery made the most sense to me,” Nehart said. “First of all, because of Dr. Nguyen’s extensive experience in performing these types of operations, but also because it posed the least risk for any complications and would be less painful than open surgery. Plus I would only have to spend one night in the hospital.

“Of all the doctors I have met, Dr. Nguyen is one of the best I have seen, He spent 90 minutes with us explaining all the surgical options. He showed us where the cancer was located and how it had spread within my prostate. He explained everything so clearly even drawing diagrams making sure we understood what was happening.”

“Dr. Nguyen did a great job,” said Nehart. “I was up walking the day after surgery and back in the gym just two weeks later. I even participated in 5K just a month after my procedure, a 15K in Las Vegas last February, and I am currently training for a triathlon this summer.”

“Everything Dr. Nguyen told me was spot on,” Nehart added. “Robotic-surgery is the way to go. I just had my second PSA following my prostatectomy and everything looks good.”