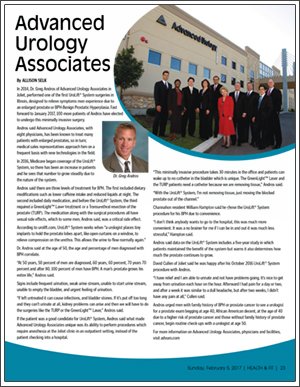 In 2014, Dr. Greg Andros of Advanced Urology Associates in Joliet, performed one of the first UroLift® System surgeries in Illinois, designed to relieve symptoms men experience due to an enlarged prostate or BPH-Benign Prostatic Hyperplasia. Fast forward to January 2017, 100 more patients of Andros have elected to undergo this minimally invasive surgery.

Andros said Advanced Urology Associates, with eight physicians, has been known to treat many patients with enlarged prostates, so in turn; medical sales representatives approach him on a frequent basis with new technologies in the field.

In 2016, Medicare began coverage of the UroLift® System, so there has been an increase in patients and he sees that number to grow steadily due to the nature of the system.

Andros said there are three levels of treatment for BPH. The first included dietary modifications such as lower caffeine intake and reduced liquids at night. The second included daily medication, and before the UroLift® System, the third required a GreenLight™ Laser treatment or a Transurethral resection of the prostate (TURP). The medication along with the surgical procedures all have sexual side effects, which to some men, Andros said, was a critical side effect.

According to urolift.com, UroLift® System works when “a urologist places tiny implants to hold the prostate lobes apart, like open curtains on a window, to relieve compression on the urethra. This allows the urine to flow normally again.”

Dr. Andros said at the age of 50, the age and percentage of men diagnosed with BPH correlate.

Signs include frequent urination, weak urine stream, unable to start urine stream, unable to empty the bladder, and urgent feeling of urination. “If left untreated it can cause infections, and bladder stones. If it’s put off too long and they can’t urinate at all, kidney problems can arise and then we will have to do the surgeries like the TURP or the GreenLight™ Laser,” Andros said. If the patient was a good candidate for UroLift® System, Andros said what made Advanced Urology Associates unique was its ability to perform procedures which require anesthesia at the Joliet clinic-in an outpatient setting, instead of the patient checking into a hospital.

“This minimally invasive procedure takes 30 minutes in the office and patients can wake up to no catheter in the bladder which is unique. The GreenLight™ Laser and the TURP patients need a catheter because we are removing tissue,” Andros said.

“With the UroLift® System, I’m not removing tissue, just moving the blocked prostate out of the channel.”

Channahon resident William Hampton said he chose the UroLift® System procedure for his BPH due to convenience.

“I don’t think anybody wants to go to the hospital, this was much more convenient. It was a no brainer for me if I can be in and out-it was much less stressful,” Hampton said.

Andros said data on the UroLift® System includes a five-year study in which patients maintained the benefit of the system-but warns it also determines how much the prostate continues to grow.

David Cullen of Joliet said he was happy after his October 2016 UroLift® System procedure with Andros.

“I have relief and I am able to urinate and not have problems going. It’s nice to get away from urination each hour on the hour. Afterward I had pain for a day or two, and after a week it was similar to a dull headache, but after two weeks, I didn’t have any pain at all,” Cullen said.